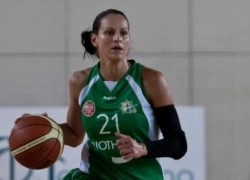 According to her team’s website in the US, Penicheiro will be back in Los Angeles soon for her second season with the LA Sparks — 14th in the league.

“The WNBA’s all-time leader in assists (2,398) and steals (728), Penicheiro returns for a second season with the LA Sparks,” states the site.

In a recent interview for WNBA.com, Ticha Penicheiro talked about her stay in Portugal. She said, “This year being back in Portugal has given me a chance to play in front of my childhood friends and meet up with people that I haven’t seen in a long time, but this summer I’ll be back in America. So I guess I’m blessed because I have the best of both worlds!”

Born in Figueira da Foz, Ticha Penicheiro  (full name Patrícia Nunes Penicheiro) is one of the best professional basketball players in the history of the WNBA. She came to the United States in 1994 after winning a scholarship to play college ball at Old Dominion. In 1988, when Ticha first joined the Portugal National Team, she was only 14 years old.