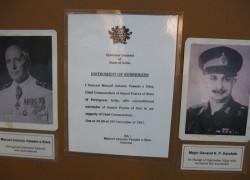 Thousands of Indians and their descendants –  in the former colonies of Goa, Daman and Diu – still could claim  Portuguese citizenship.  It is estimated that nearly three million still could make that claim for themselves including two subsequent generations.

To qualify claimants must submit an original birth certificate attesting that they or a relative were born before December 19, 1961, the day the former Indian colonies were liberated from Portuguese rule.

For most Goans the most favoured destination  today is the United Kingdom where an estimated 50,000 Goan-Portuguese have settled.