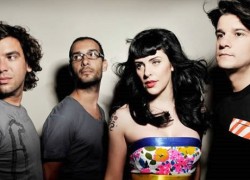 Personally, I have always loved The Gift – a popular alternative rock band, formed in 1994 in Portugal – that has released five albums to date. The group is formed by Sonia Tavares, Nuno Gonçalves, John Gonçalves and Miguel Ribeiro. When I immigrated to North America, I knew I could not speak Portuguese often, so I always kept my ‘portugueseness’ nearby: Da Weasel and The Gift CDs shelved next to my Pessoa books. The Gift is still part of my favorite playlists. Their music was a strong companion from adolescence through adulthood. Fácil de Entender, Driving You Slow, Music, or even Gaivota brought me solace when I broke up with my first boyfriend, invited me to sing and dance along, and comforted me when I had saudades.  I was exited and felt very honored to interview John Gonçalves, member of The Gift.

Was it important for The Gift to represent Portugal in the Iberian Suite, particularly when you are commemorating your twentieth anniversary?

What was different for The Gift when playing for an audience abroad?

It was really interesting. We had never played in Washington D.C. although we had played several times in the US including New York, California, Los Angeles, Philadelphia, Chicago, Cincinnati, Toronto. We did not know whether we were going to have an audience in Washington D.C. The interesting aspect of playing in the US is how each state is different, in that we could have two hundred people coming to see us in Philadelphia one day and zero in Washington D.C. the next day. However, we were extremely happy. We had a full house – 300 to 500 people in the room – and we received amazing feedback from the audience. When we were signing albums after the show, we realized we had a mixed audience: Portuguese living in the US, Portuguese students in American universities who decided to go watch the concert, but also people who did not know about us and decided to come watch the concert. When we play in Portugal, people know our work very well, whereas when we play abroad we always have to win (conquistar) the audience because there is a high chance people will not know who we are. We have to win and conquer like our navigators did when winning new territory. It makes a tremendous difference playing in Portugal versus playing abroad. Even in countries where we have an established fan base, such as Spain or Brazil, our goal is to captivate our audience.

I understand the importance of captivating an audience, I am studying theatre in the US. How was it for you to see our theatre represented in Washington?

Yes. Teatro Meridional is one of our great references in Portugal. I’ll share something with you. I must have been 18 years old when I organized a Teatro Meridional production in Alcobaça. It was heart-warming to learn that after many years both The Gift and Teatro Meridional were involved in this project in Washington. Theatre Meridional has always been a model of independent art, with great content and excellent actors. It was a pleasure to be part of this cultural catalogue with them. We haven’t conquered the world but we have planted important seeds in various art forms, everywhere.

Will The Gift return to North America in the near future?

We will. We will be in Toronto on June 13th, as part of the Portuguese week celebrations. Also, once our new album comes out we plan to tour in the US and Canada, probably in 2016. We hope to continue counting on the fantastic support of the Arte Institute, which has supported us in every aspect, from promotion to production. Sometimes people do not know what being a musician means. To be a musician is to be a nomad, a nomad in search of listeners, and we always look for new listeners.

What message would you like to leave for our PAJ readers?

The message I would like to leave is a simple one. There is a tendency for us, immigrants and Portuguese working abroad, to distance ourselves from Portugal over time. My message concerns the use of social media and social networks to stay in the loop regarding Portuguese art and culture – in Portugal and abroad – be it music, theatre or film. It is important for people to understand and promote Portuguese culture through out social media and simply through word of mouth by sharing their knowledge with others. Every one of us plays a vital role in promoting new hip-hop, new literature, new pop, new fado. There is a vast artistic talent pool in Portugal and it is important for that talent to be shared.

Lígia Batista was born in Lisbon but she grew up between Odivelas and the other side of the Tejo bridge, in Margem Sul. She moved to Canada in 2006 at age 16, and has since lived in Venezuela and Scotland. Currently, Lígia lives in Boulder, Colorado, where she is pursuing a Master’s in Theatre with a focus on mental health at the University of Colorado and plans to further her studies in psychiatry. At present she is working on a theatre project to be launched in Portugal for young adults experiencing depression. When not acting or working on her thesis, Lígia focus on writing about standards of normality and abnormality across cultures and art as a catalyst for personal growth. From Portugal, Lígia deeply misses the language, the bread, and the train rides across the Ponte 25 de Abril. Oh, and of course, Sagres, her favorite beer.