“The Bang Bang Club” based on João Silva’s book – Film 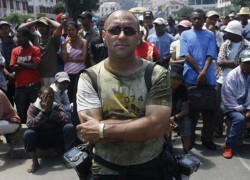 The just release movie feature “The Bang Bang Club” is based on a book co-authored by photojournalists João Silva and Greg Marinovich both working for The New York Times. The film opens today in New York, Los Angeles, Chicago, Washington, Seattle, and San Diego and Irvine, California.

The book is based on a real life drama involving a team of four journalist – João Silva, Kevin Carter, Ken Oosterbroek and Kim Comley — documenting the South African civil war, between 1990 and 1994, when Nelson Mandela was released from jail and his African National Congress defied the white rule government, which led to free elections in 1994 and the end of apartheid.

Ken Oosterbroek was killed on assignment, Greg Marinovich was seriously injured there, and Kevin Carter committed suicide in 1994.

João Silva was born August 9, 1966, in Lisbon, Portugal. He has worked in Africa, the Balkans, Central Asia, Russia, and the Middle East. On October 23, 2010, when on assignment for The New York Times, he was severely injured by a mine in southern Afghanistan covering American troops.  His both his legs were lost below the knees. He continues to recover at Walter Reed Army Medical Center, in Washington DC.

Recently the Frontline Club honored him and friends have set up the Friends of Silva website to help raise money for his recovery. João Silva’s portfolio can be visited here.