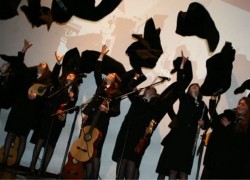 The Women’s Tuna [Tuna Feminina] from the School of Medicine of the University of Porto, Portugal, will perform on Saturday, July 28, at 7pm, at the community center of the Saint Anthony Church, located at 400 Cardinal Medeiros Avenue, Cambridge, MA.

The performance is being promoted by the Portuguese  Consulate General in Boston in partnership with the Portuguese American resident community of the Greater Boston. The event is free and open to the public.

Established in the 18th century, the University of Porto  is currently the largest education and research institution in Portugal. It offers over 700 programs by over 2,300 teachers (71% of which hold PhDs) to about 31,000 students. Its 1,700 administrative staff attends to 15 schools and 69 scientific research units, spread across 3 university campuses located in the city of Porto.