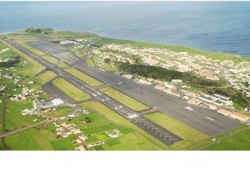 The United States Government has informed the Portuguese Government that the U.S. Air Force has already ratified a proposal to significantly reduce its military presence at the Lajes Air Field, on Terceira island, in the Azores.

The cutbacks are part of a global U.S. Department of Defense belt-tightening policy due to budget constraints, as part of a wider $500 USD billion reduction in U.S. military spending.

The Lajes Air Field, the second largest employer on the island, employs about 700 tenured Portuguese workers and nearly 90 short-term workers. The U.S. decision will reduce to about 10% of the current number of personnel at the facility.

The decision could have a significant economic impact over job losses on the island, said João Ormonde, the representative of the Portuguese workers at the U.S. military facility.

Vasco Cordeiro, the newly elected President of the Regional Government of the Azores, has also expressed his concern regarding the U.S. Department of Defense decision to downsize its military presence in the Region. In a statement Friday, Cordeiro appealed to Portugal’s central government to vigorously secure the interest of the Region and the rights of the workers.

Portuguese Foreign Minister Paulo Portas has said that Lisbon will “shortly” take a stand on the reduction of personnel at the Lajes Air Field.

“The reductions decided by the United States will obviously have consequences”, Portas acknowledged saying the Portuguese central government and the Regional Government of the Azores would work together to “reduce the impact of the decision from an economic point of view on the island of Terceira (…) and unemployment.”

Last year, the U.S. Secretary of the Navy, Ray Mabus, had stated that the future of the Lajes Air Field was uncertain, and that leaving the military facility in the Azores was one option under consideration.

In a recent development, it has been reported by several sources, the Chinese Government may be looking at taking over the Lajes Air Field, if it becomes vacant.

This past summer, Chinese Premier Wen Jiabao made a “technical” stop at Terceira’s airport, an indication that China may be considering to replace the U.S. presence on the island.

Lately, China has been actively looking at securing military facilities much closer to the United States, namely in Greenland and the Caribbean, and more frequent exploratory Chinese missions in the Atlantic, near the Azores, are expected in the near future, it has been reported.