An underwater pyramidal shaped structure identified by amateur sailor Diocleciano Silva, at a depth of 40 meters off the coast of Terceira Island, most likely ”not man-made,” according to Portuguese Navy bathymetry experts.

The structure found by Silva had been previously documented by the Portuguese Navy and was known to bathymetric researchers – they said. It lays near the Bank of João de Castro, between the islands of Terceira and São Miguel.

There is no scientific data to confirm the origin of the structure, but it could have been formed by a volcanic eruption – experts have said. The archipelago of the Azores is composed of nine volcanic islands.

The Azores archipelago was discovered uninhabited by the Portuguese around 1427. 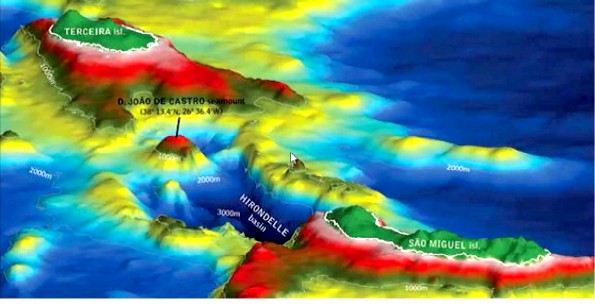 Bathymetric map of the Bank of João de Castro area, between the islands of
Terceira and São Miguel, Azores