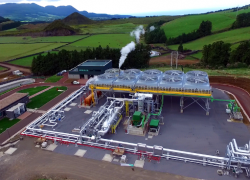 A new 4 MW geothermal power plant has been inaugurated today in Pico Alto, Terceira island, in a ceremony presided by Vasco Cordeiro, President of the Regional Government of the Azores.

With a geothermal portfolio reaching more than 340 MWe and a capacity in operation of 331,5 MWe EXERGY, the Pico Alto Geothermal Power Plant represents today the second largest geothermal binary fleet in the world.

Designed and built by EXERGY in partnership with CME for EDA Renováveis, the plant is now operational producing green electricity and meeting up to 10% of the Island electricity needs, providing a sustainable and reliable source of electricity to more than 56,000 inhabitants of Terceira.

According to the source, the 4 MWe binary plant utilizes a “geothermal high enthalpy resource, exploiting the heat available both in steam flow and geothermal brine.” 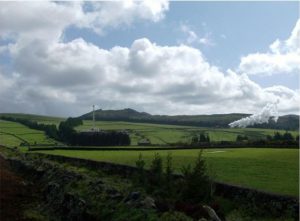 At the inauguration ceremony, Marco Bonvini COO of EXERGY remarked, “We are very proud of the successful completion of this challenging project. Pico Alto represents for us a great example of how innovation in greentech can provide sustainable solutions to satisfy people energy needs and contribute in improving the energy economics in remote and isolated site of the planet.”

Carlos Alberto Raposo Bicudo Ponte, member of EDA Renováveis Board of Directors stated, “The Pico Alto Geothermal Power Plant inauguration is the first milestone for the commercial geothermal exploitation starts up in Terceira Island, increasing the diversification of the power generation mix and boosting the contribution from renewables.”

The work of several contractors, the project is estimated to produce energy exceeding 10% of the electricity of Terceira, resulting in savings to the economy of the Azores with environmental benefits, such as reducing the greenhouse gas emissions.