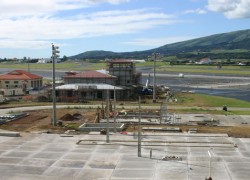 According to a U.S. Air Force news release, the Defense Department Dependents School at Lajes Field will be closed and other services will be reduced for airmen on one-year unaccompanied tours.

“We expect all families to depart by summer 2014 or shortly thereafter,” Col. Chris Bargery, 65th Air Base Wing commander, said in the release.

The U.S. decision will reduce to about 10% of the current number of personnel at the facility. The decision could have a significant economic impact over job losses on the island.

Last month, the United States Government informed the Portuguese Governmen the U.S. Air Force had already ratified a proposal to significantly reduce its military presence at the Lajes Air Field.

The Lajes Air Field, the second largest employer on the island, employs about 700 tenured Portuguese workers and nearly 90 short-term workers.

The cutbacks are part of a global U.S. Department of Defense belt-tightening policy due to budget constraints, as part of a wider $500 USD billion reduction in U.S. military spending.