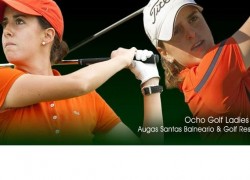 The 2013 Azores Ladies Open will take place October 4-6 in the Golf Club of Terceira, Praia da Vitória, one of the oldest and most iconic courses in Portugal, with a long tradition in professional golf.

On its third edition, the event is the main female Portuguese golf tournament with a cash prize of €25,000.

Some of the most promising European female golfers will participate in the tournament with 70 athletes from 24 countries.

Azores Ladies Open is part of the LET Access Series, the official feeder of the Ladies European Tour. The 2013 LETAS schedule will feature a minimum of twelve tournaments; three events will constitute the GENERALI Ladies Tour

The top five players on the 2013 LETAS Ranking will earn membership of the Ladies European Tour for the 2014 season, while the next fifteen players will have the opportunity to progress to the final stage of LET Tour School, thereby skipping the first qualifying event.