Terceira: Deep concern over US withdrawal from Lajes – Azores 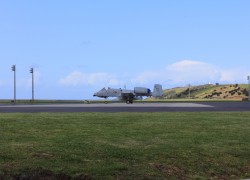 The government of the Azores archipelago said Thursday it was trying to “reduce any possible impact on the (local) economy and society,” following the announcement by the United States of a partial military withdrawal from the Lajes Air Field, on Terceira, the second largest employer on the island.

André Bradford, Regional Secretary for the Presidency, said the situation was a question of “extreme importance and sensitivity,” especially due to the economic impact over job losses on the island.

The cutbacks announced by the Pentagon in the Azores are part of a global US belt-tightening policy due to budget constraints.

The decision is not directed at the Portuguese island in particular, though the mid-Atlantic base is not as important as it used to be as military planes now cross the ocean without the need for refueling.

The Lajes Air Field, which is also used as a civilian airport, employs about 700 tenured Portuguese workers and near 90 short-term workers.