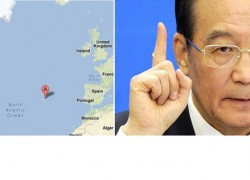 Evidence of Chinese fleets routinely patrolling the Atlantic Ocean, near the Azores, is raising speculation that China may have thrown an eye on the military Lajes Air Field, on Terceira Island, jointly managed by Portugal and the United States.

According to the Asia Times, “The whole psychodrama unfolded at the end of June 2012, when then Chinese premier Wen Jiabao made a stopover on the Portuguese island of Terceira, in the Azores, after a four-nation visit to South America,” writes geopolitical analyst Emanuele Scimia.

Last year, the United States had informed the Portuguese government that the future of the Lajes Air Field was uncertain and that U.S. Air Force was losing interest in the military facility. As a step, personnel at Lajes Air Field would be reduced of 400 military and 500 family members.

“The Pentagon’s withdrawal from Terceira would represent a problem for the government in Lisbon, since the island’s economy hinges largely on the base,” Scimia writes.

Indeed, Lajes Air Field is the second largest employer on the island, employing about 700 tenured Portuguese workers and nearly 90 short-term workers. The U.S. decision to down size the military outpost will have a significant economic impact over job losses on the island.

Concerns over Beijing developing a close relationship with the debt-ridden Portugal are also real. China has provided Lisbon with financial help over the last two years while Chinese and Portuguese officers have exchanged views on escort and anti-piracy operations in the Arabian Sea.

“By virtue of Lajes Air Field, Washington can control and patrol a vast portion of the Atlantic space. If Beijing were able to get its hands on this strategic outpost, it could disrupt air and sea traffic between Europe and North America, deny maritime access to the Mediterranean Sea and even threaten the US eastern coast, according to some naval experts,” says Scimia.

In the meantime, while the evidence mounts that China is actively looking at securing military facilities much closer to the United States, namely in Greenland and the Caribbean, more frequent exploratory Chinese missions in the Atlantic, near the Azores, are expected in the  future.