Terceira: Azoreans in the diaspora should have the right to vote – Azores 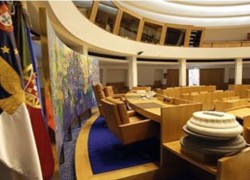 The former president of the Azorean Parliament, Guilherme Reis Leite, defended Thursday that the Azoreans in the diaspora should have the right to participate in political process in the Azores.

Speaking at the 1st Summer University Conference, held on Terceira island July 15-18, he claimed that  the Azoreans in the diaspora should have the right to vote in the regional legislative elections.

It is has been estimated that the Azorean population in the diaspora is three times larger than the resident population on the islands estimated at 250,000. The majority of the Azoreans living outside the archipelago have settled in mainland Portugal, the United States, Canada and Brazil.

Promoted by the Instituto Açoriano de Estudos Europeus e Relações Internacionais (IAEERI),   the 1st Summer University Conference debated issues relating to the geostrategic position of the Azores, the geostrategic role of the Azores in the global context, incorporating the archipelago in international organizations, and the relevance of the Azores for the United States in the context of the Lajes Air Field.

Established in 2011, the IAEERI is based in Lajes, Terceira. Its mission is to contribute to the debate over the role of the Azores in the context of the Atlantic.