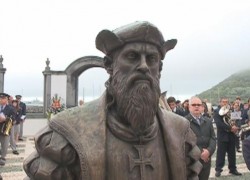 Portuguese explorer Vasco da Gama (c.1460-1524), the first navigator to sail directly from Europe to India, was honored with a statue dedicated to him in Angra do Heroísmo, Terceira.

The unveiling of the statue, on June 10, memorializes Vasco da Gama’s stop at Terceira island, in 1499, to lay to rest his brother Paulo da Gama, perished at sea on the homeward voyage.

According to historical records, Vasco da Gama buried his brother at the monastery of São Francisco, in Angra do Heroísmo, and lingered there for 1 to 3 months in mourning.

Two decades ago, Vitor Baptista commissioned a statue of world famous Portuguese soccer player Eusébio, unveiled January 25, 1992, at Sport Lisboa Benfica in Lisbon. Eusébio (1942-2014) is considered by many as one of the greatest footballers of all time. Both statues were created by Duker Bower, a Vermont (US) figurative artist.