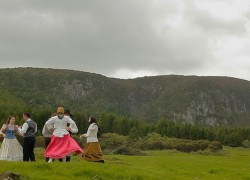 The 27th International Folklore Festival of the Azores will be held on August 7-13, in Angra do Heroísmo, Terceira, Azores, with the participation of visiting groups from mainland Portugal and 11 countries, namely Belgium, Slovakia, Spain, Estonia, France, Indonesia, Italy, Norway, Russia, Turkey and Ukraine.

Established in 1983, in Angra do Heroísmo, the International Folklore Festival of tthe Azores aims to boost popular culture, with particular emphasis on the traditional dances and songs.

The Festival is co-sponsored by  Regional Goverment of Azores, the Municipality of Angra do Heroísmo and the International Council of Organizations of Folklore Festivals and Folk Arts (CIOFF) a non-Governmental Organization in formal consultative relations with UNESCO.

According to Cesário Pereira, president of the festival organization committee (COFIT), the event is considered by the CIOFF the best and largest event of its kind worldwide.

Over the years, the International Folklore Festival of the Azores became increasingly an important venue  for the cultural exchange of folklore groups from all over the world.

Every year, in the second week of August, the festival becomes a tradition with the goal to promote diversity and foster friendship among the participating countries.