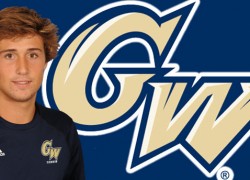 Dias is the fifth Colonial to be named Most Outstanding Rookie Performer as he heads to his first-ever NCAA Tournament having won nine of his last 10 matches.

He was the first-ever A-10 men’s tennis student-athlete to earn the distinction of both of the conference’s top honors, after boasting an 18-5 overall record at No. 1 singles and an 11-4 record at No. 1 doubles.

On April 4, Dias was named Atlantic 10 men’s tennis Rookie Performer of the Week after posting 2-0 records at No. 1 singles and doubles. The award marked his fourth honor of the season and the most for any A-10 rookie this year.

Francisco Dias, 20, was born in Lisbon, Portugal, where he has won three national championships and is currently ranked No. 8 in the country. He is the only player in Portugal’s history to have owned four ATP rankings by the age of 17.  Dias is currnetly majoring in business administration.