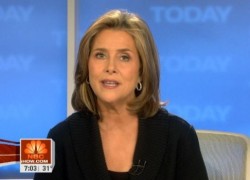 Currently, Vieira is working on a pilot episode of a light pre-taped daytime, entertainment-driven show, to be launched in the fall 2014, it has been reported.

Trial shows were tapped in Chelsea, New York, May 20 and 21. The show, according to a NBC release, will feature “fascinating guests, celebrities, and surprises .”

Vieira, who also hosted “Who Wants to be a Millionaire,” has been on daytime television for over 15 years.  Her reported $11 million annual contract at NBC expired in 2011, when Vieira announced she was leaving the network to spend more time with her husband who is battling multiple sclerosis. Vieira and Matt Lauer co-hosted the program for five years.

Of Portuguese descent, Vieira,  57, is known to have roots in Faial, Azores