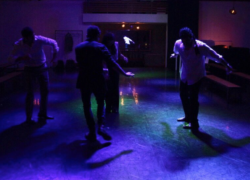 Founded in 2014, the Saudade Theater was created to discover, translate and produce Portuguese works for American audiences. In the group’s own words, it is “the first and only theatre company in the United States dedicated to producing original and thought-provoking work grounded in the Portuguese-American consciousness.”

Working together to produce necessary and significant work, Saudade Theater’s first production of “The Constitution” by Mickaël de Oliveira, premiered in New York City at the Under St. Marks Theater. The premise is “four actors, heroes of a new society, are invited by the government to write a new Constitution. Sequestered from society. Six days. No experience in the matter. A Perfect Constitution for an imperfect nation.”

Broadway World called the performance “an intense, thought-provoking and overall fascinating show.” Next performance dates are scheduled for April 15 – May 01.

Since then, Saudade Theatre has expanded its original mission to develop and embrace new work in collaboration with multicultural artists in a quest to understand the ensemble’s Portuguese-American identity.

For this interview, Millicent Borges Accardi contacted Executive Director, Vanessa Varela who has responded to the questions below after consulting with the Saudade Theater ensemble. In Vanessa’s words, “While we did not have a response to all the questions, there was ample opportunity to discuss our work in thoughtful ways and to discuss the exciting path we are taking in 2022.”

Q: Where is Saudade Theatre located?

A: Saudade Theatre was born in New York City in 2014, where we mounted our first production, hosted readings and performed at cultural events across the city.

In 2017, we had the opportunity to become integrated in the Los Angeles theatre community and over the years that followed were able to bring our Portuguese Table Series as well as our productions of The Constitution and My Favorite Suicide to LA stages.

With the invitation to our artistic residency at Frigid New York, Saudade Theatre has now returned home. Nevertheless, the pandemic has forced us to stay virtually connected. One of our resident spaces, the 99-seat Kraine Theatre, has been outfitted with a live streaming setup, so our productions in NYC will be accessible everywhere.

We do intend to tour future productions, starting with El Comanchero or [The Path to the Kingdom of Heaven], to the theaters in Los Angeles, Toronto, Atlanta and Miami in the coming years as well.

Q: Can you tell me about your new project, El Comanchero? 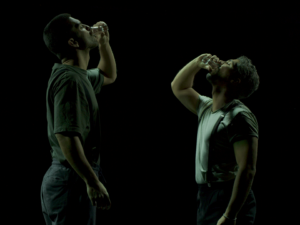 On the stage for EL COMANCHERO

A: El Comanchero or [The Path to the Kingdom of Heaven] is the newest original work from Saudade Theatre, and the first play written collectively by Filipe Valle Costa, Diogo Martins and Pedro Marnoto.

Summary: On opening night, two actors prepare for the performance of a lifetime but the grievances of their shared past as immigrants in the United States steer them away from the job at hand.

Naturally, this work is very personal. The play is a surrealistic investigation of the authors’ personal experiences as immigrants and friends in the United States. It examines the inherent condition of the immigrant, exploring the concept of departure, the expectation of returning to the idyllic home, and the disquiet of a divided spirit: between the memory of what was and what could have been. The work speaks to the core of who we are, our name, saudade, and our mission: Saudade Theatre is the first and only theatre company in the United States dedicated to producing original and thought-provoking work grounded in the Portuguese-American consciousness.

Q: How many plays have you produced?

Saudade Theatre has also produced several readings and festivals, namely our signature Portuguese Table Series, an open reading of works from Portugal and its diaspora as translated by Saudade’s resident artists.

Q: How did the theater group respond to the Covid pandemic?

A: In March of 2020, Saudade Theatre filled the live theater void by producing the 10-week Quarantine Table Series: a once-weekly virtual gathering to explore plays that placed isolated human beings at the center of a struggle against an invisible enemy; free readings were held in English via Zoom.

In July 2020, Saudade Theatre introduced Re.Descobrimentos, a virtual series of original plays on the legacy of colonialism & racial oppression. The selected works aimed to reevaluate historical events and analyze their true consequences through a new lens. ​​Hosted via Zoom, Re.Descobrimentos was followed by a moderated post-show discussion of the festival’s themes.

Q: What is the most memorable performance?

A: Every production or event has represented a new phase of growth and collaboration for us as a company and as individual artists. These experiences have impacted us at our cores. So, it’s really impossible to identify a favorite.

Perhaps the most “charged” has been our first production, Oliveira’s The Constitution in New York City, with our ensemble together on a stage for the first time under the name of Saudade Theatre. Because it was our first fully-staged production, it may hold a special place in our hearts, but each new endeavor brings with it a renewed sense of excitement and gratitude, and a whole new set of discoveries.

That said, we truly are thrilled with El Comanchero or [The Path to the Kingdom of Heaven] as it constitutes our first piece devised entirely by members of the company.

Q: You recently announced that you are adding a second performance space in New York, how did that occur and what do you hope to accomplish during your residency in NY?

A:  In early 2021, Saudade Theatre was invited to become a resident company at Fridge New York. The NYC-Based arts organization is in its third decade providing both emerging and established artists the opportunity to create and produce original work without limit to content, form, or style, and to amplify their diverse voices.

We’d entered the second year of the pandemic focusing on developing our own new works, albeit through Zoom, since our members were spread across New York and Los Angeles – after all, travel and live performances at that time were out of the question.

So, this call about a residency was a complete surprise. We were immediately grateful and excited for the opportunity to have a physical home and robust organizational support, and the timing couldn’t have been better.

The fact that Fridge had been our first artistic home made it all the more serendipitous. Live entertainment is back, and people are being so supportive of Saudade Theatre and the arts in general. It’s a great time to engage in conversation about our collective experience of the last three years, and to reexamine our histories in context of the present moment. Saudade Theatre will be using our residency to launch our new works in development, make lasting connections with multidisciplinary artists and audiences, and work under the guidance of an experienced arts organization to structure ourselves in a sustainable and scalable way.

Q: Are there topics or subjects that you won’t produce?

A: Saudade Theatre is open to all possibilities.

Q: Do you have advice for playwrights who may want to submit work?

A: Yes. We love to meet new artists and read submitted works. Please email Vanessa@SaudadeTheatre.org to start a dialogue.

Q:  How can PAJ readers see a performance by Saudade Theater?  Are there performances available YouTube or Zoom?

A: Now that Saudade Theatre is residence with Fridge New York, all performances can be enjoyed live or virtually. New York audiences can attend in-person in our 99-seat Kraine Theatre space, while audiences outside of New York can purchase live streaming tickets.

A: In 2022, Saudade Theatre will produce our newest original work, El Comanchero or [The Path to the Kingdom of Heaven], at the Kraine Theatre in NYC starting April 15.

This summer, Saudade Theatre will be in co-production with the University of Florida School of Theatre and Dance in Gainesville, FL to workshop another play in development titled I am the Dead Man, created by Stephen Ruffin and Filipe Valle Costa, which will have 4 performances from July 21-24. In the fall we will re-introduce Portuguese Table Series to our New York Community with readings of selected works from the Portuguese diaspora, hosted in our new home in the East Village.

Q: Is there an upcoming performance, event, or fund-raiser that you would like to mention, in case PAJ readers want to contribute or attend?

A: There was a fundraising campaign to support the making of El Comanchero or [The Path to the Kingdom of Heaven] that ended recently, but anyone who is interested in our work can help fund the show by making a tax-deductible donation – gifts of any size are impactful!

Q: To close, what would be your ideal or DREAM play to put on? And why?

A: Developing our own work has redefined the path forward for Saudade Theatre. While we continue to read and explore playwrights from Portugal and plan to produce more of those texts in the future, we also are investing in our singular voice and perspective in the American theatre landscape.

Our dream is to produce our own original works, to produce works from playwrights across the Portuguese diaspora, to tour our original and found plays to theatre festivals around the world, and to continue building our global community through in-person and virtually accessible events.

Millicent Borges Accardi is the author of four poetry collections, most recently, Through a Grainy Landscape (inspired by Portuguese writings) and Quarantine Highway (FlowerSong Press 2022). Among her awards are fellowships from the National Endowment for the Arts, Fulbright, CantoMundo, the California Arts Council, Foundation for Contemporary Arts (Covid grant). Yaddo, Fundação Luso-Americana (Portugal), and the Barbara Deming Foundation, “Money for Women.” She founded the popular Kale Soup for the Soul reading series and has written over 50 interviews with Luso writers, artists, and musicians. She lives in Southern California.