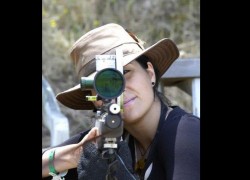 Ana Maria Pereira, from Portugal, has won the title of world’s champion in the Target Field, category female (PCP), at the XII World Target Field Championship held in Romsdal, Norway.

The big winner was Great Britain, which earned 562 points, followed by South Africa (532) and Germany (527). The event, organized by the World Field Target Federation – WFTF was held between 16 and 19 August, with 50 targets each day, a total of 150 points was the target.

The event was hosted last week by the Norwegian Field Target Association and 116 competitors from eight countries around the world qualified to participate.