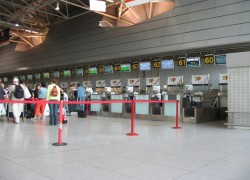 In a statement, SPAC said the decision to strike is a demand to the administration of TAP Air Portugal, the government run airline, “to comply with the rules of the company labor contract and to reinstate a working environment respectful of the parity between pilots and the administration.”

According to SAPC, the decision to strike also demands that the government approves of pilots taking part in the decision making progress to privatize the airline, as provided by the labor contract signed in 1999.

SPAC also requests “access to the information pilots need to make an independent assessment of the company.” SPAC stressed that the decision to strike is not related to a request for higher compensation.

Pilots are said to have invested over 400 million-euro in the company since 1999, representing 20% of TAP Air Portugal assets and the right to one seat at the executive board.

The strike will cost an estimated 40 million-euro, according to Lisbon-based Diário Económico. The last strike by SPAC, staged in September 2009, lasted two days and cost TAP around 10 million-euro.

TAP Air Portugal (TAP) and several other state companies are scheduled for privatization this year as part of Portugal’s financial recovery plan.

Last week, demonstrations by thousands of Portuguese civil servants and the military took place in Lisbon to protest over severe austerity measures proposed by the government for 2012.

Earlier in the month, public transportation services were severely disrupted across Portugal. In October, Portugal’s two main unions called for a general strike scheduled for November 24.