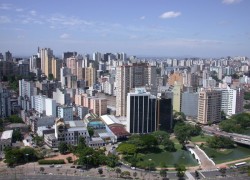 Starting in June, TAP Air Portugal  will launch flights between Lisbon and Porto Alegre – its tenth destination in Brazil.  In the process it will become the first long-haul international carrier to introduce scheduled services to the capital city of the southernmost state of Rio Grande do Sul.

The four times weekly link will open on June 12, but frequencies are expected to drop to three times weekly during the Northern Winter schedules from late October.

Porto Alegre is the tenth most populous municipality in Brazil, with 1,409,939 inhabitants, and the centre of Brazil’s fourth largest metropolitan area (3,979,561 inhabitants).  The city lies on the eastern bank of the Rio Guaiba , where five rivers converge to form the Lagoa dos Patos , a giant freshwater lagoon navigable by even the largest of ships.  This five-river junction has become an important alluvial port as well as a chief industrial and commercial centre of Brazil, helping to attract a number of local and international businesses into the area.

Portugal holds the largest flight market between Europe and Brazil although France and Italy are not far behind.  Most of the traffic from France and Italy is focused on the main markets of Rio de Janeiro and Sao Paulo, whereas multiple links to regional destinations means traffic from Portugal is spread around Brazil.  These three markets (Portugal, France and Italy) account for more than half the  traffic to Brazil from the continent.

TAP Portugal operates numerous domestic destinations in Portugal,and internationally in north America, Europe, Africa and US.  With 74 flights per week, it is the European airline with the most flights to Brazil.