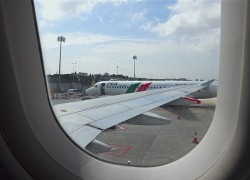 Tap Air Portugal and the National Union of Civil Aviation Flight Attendants have reached an agreement Friday resulting in the cancelation of  a 10 day cabin crew strike scheduled  for June 18, 19, 20, 25 and 26, and for July 1, 8, 15, 22 and 29. The strike was announced on June 1 to protest staff layoffs.

The agreement stops TAP from laying off staff as planned, and allows for additional resting hours for the cabin crew,  additional free trips and the hiring of temporary workers.

TAP Air Portugal hoped to save 14 million euros ($20 USD million) a year by cutting one attendant per flight, bringing the number of attends on board to the international average.

As condition for obtaining the three-year 78 billion-euro (US$116 USD billion) bailout with the European Union, the European Central Bank and the International Monetary Fund, the Portuguese government will have to sell TAP Air Portugal, scheduled for auction later this summer.

Portuguese railway union leaders, at state-run rail company – Comboios de Portugal – also called off a 24 hour general strike scheduled for Friday, June 10, after receiving confirmation the government had agreed to meet some of their demands regarding company agreements. The strike would have halted all train services in Portugal forcing the cancellation of all passenger and freight services.

On June 3, a four hour strike, by the national rail company engineers, forced the cancellation of almost all suburban services to protest against an overtime ban.

Portuguese labor unions are calling for additional strikes to protest austerity measures being implemented after the June 5 elections.  Before the elections, Portugal agreed on a three-year, 78-billion-euro ($116 USD billion) bailout loan with its European partners which include privatization plans, layoffs, freeze in public workers pay, changes in workers’ pension policies and further tax increases.

Most protests and strikes are being organized by the two largest national coalitions of labor unions, the CGTP representing 727,000 workers in 81 unions, and the UGT with about 500,000 members in 58 unions