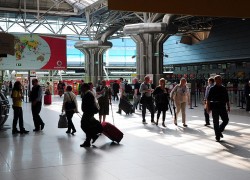 In a statement to the press, unionist Ricardo Andrade said the strike is aimed at stopping TAP from laying off staff as planned, which goes against the workers’ contract agreement.

TAP Air Portugal, a State run airline, hopes to save 14 million euros ($20 USD million) a year by cutting one attendant per flight, bringing the number of attends on board to the international average.

National flag carrier  could lose 50 million-euros ($72.3 USD million) if the cabin crew union carries out 10 planned days of strikes in June and July, TAP air Portugal CEO Fernando Pinto said Wednesday. He said the company would lose “about 5 million-euros”  ($7.2 USD million) for each day of stoppage.

As condition for obtaining the three-year 78 billion-euro (US$116 USD billion) bailout with the European Union and the International Monetary Fund, the Portuguese government will sell TAP Air Portugal, scheduled for auction later this summer.

On Monday, commuters and travelers across Portugal scrambled for alternative transportation as a strike by railroad ticket vendors and collectors paralyzed most trains. The action followed a weekend strike of overtime work by other railway unions that are set to run through the end of June.

In the United States, currently TAP Air Portugal operates flights to Newark departing from Lisbon and Porto, with seven flights per week out of Lisbon, and three from Porto. During the winter, it operates five-times-weekly services from Lisbon and twice-weekly from Porto. TAP currently connects Lisbon to Miami offering easy access to the cities of Fort Lauderdale, West Palm Beach, the Orlando theme parks, Fort Meyers and Tampa.