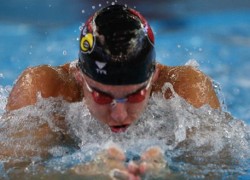 Almeida, 23, a member of Portugal’s 2012 Olympic team, became the first University of Louisville men’s swimmer to win a national title. Remaining significantly ahead of his competitors, he finished with the timing of 1 minute and 52.82 seconds.

On December 2011, the University of Louisville senior qualified for the 2012 London Olympics by finishing seventh in 1:01.44 in the 100-meter breaststroke at the AT&T Winter National Championships at Georgia Tech.

In 2011, Almeida broke the Portuguese national record for the 100-meter breaststroke in the first day of competition in the 14th FINA World Swimming Championship in Shanghai, China, at the Shanghai Oriental Sports Center.