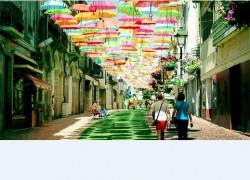 The Portuguese people 85th out of 156 countries in the nation’s “happiness scores” according to the 2013 World Happiness Report released Monday by the United Nations.

The report shows a decrease of 0,35 points, from rank 73rd to rank 85th, in the Portuguese “happiness score” compared to the previous UN survey taken between 2007 and 2010.

The happiest countries in the world were Denmark, Norway, Switzerland, the Netherlands and Sweden. The saddest places were Rwanda, Burundi, the Central African Republic, Benin and Togo.

Results were computed from survey takers’ self-reported evaluations of their own lives. The participants were asked to rank their answers from 0 to 10. They completed the survey anytime from 2010 to 2012.

The second of its kind, the report was prepared by a coalition of researchers including John F. Helliwell of the University of British Columbia and Canadian Institute for Advanced Research, the London School of Economics’s Richard Layard and Jeffrey D. Sachs, director of Columbia University’s Earth Institute.