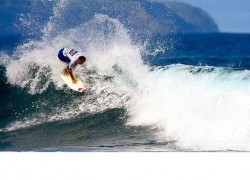 Scheduled for September 3 through September 8, the event is expected to gather on São Miguel island the world’s top 100 surfers, competing for a cash prize of $250,000 USD.

The ASP/SATA Airlines Azores Pro event will be staged on Santa Barbara beach, in Ribeira Grande, with water temperatures averaging 20-24°C in the summer, known as the “Hawaii of Europe” to many surfers.

The event also counts as the first leg of Portugal’s 2013 Moche Series Cascais Trophy. The whole series, incorporated in ASP World Qualifying Series, will run from September 3 until October 27, in both the Azores (São Miguel) and mainland Portugal (Peniche/Carcavelos). 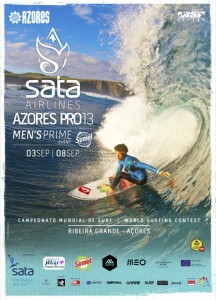 SATA Airlines is also hosting the 2013 European Surfing Championships taking place on São Miguel island from September 13 through September 21. Known as Eurosurf, the women’s and men’s competition will be held on Ribeira Grande’s Santa Barbara beach. It includes body boarding and longboarding and other activities such as sailing, fishing, canoeing, kayaking, world-class whale watching, swimming with wild dolphins and scuba diving.

Established in 1982, Association of Surfing Professionals (ASP) is dedicated to showcasing the world’s professional surfers  best  talent. In the 2013 ASP World Tour, men and women compete in separate tours at various surfing locations around the world. Surfers receive points for their best events. The surfer with the most points at the end of the tour is announced the 2013 ASP World Tour Champion.

For all results and live webcast, log on to aspeurope.com.