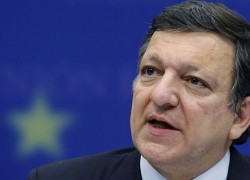 A delegation of European Union officials, led by the President of the European Commission José Manuel Barroso, met with President Barak Obama in the White House Monday as part of a long scheduled annual EU-US summit to discuss the Eurozone debt crisis and how to ease the crisis.

Speaking to the media, President Obama said the United States is ready to do its part to help stabilize the Eurozone economy and revive its growth. He added, “If Europe is contracting… it’s much more difficult for us to create jobs here at home. We’ve got a stake in their success.”

Barroso, a former Portuguese Prime Minister, said that Europe is determined to overcome the current difficulties. He stated, “I have full confidence in the determination of the European leaders. We have the member states of the European institutions to tackle this crisis.”

A joint statement released by the White House after the meeting said that both sides were committed to working together to reinvigorate economic growth, create jobs, and ensure financial stability.

“We will do so by taking actions that address near-term growth concerns, as well as fiscal and financial vulnerabilities, and that strengthen the foundations of long-lasting and balanced growth,” they stated.

The EU-US summit also addressed continuing concerns about Iran’s nuclear program and the uprisings in the Arab world, including ongoing reports of brutal crackdowns against protesters in Syria.

“We call on the Syrian government to end violence immediately, permit the immediate entry of human rights observers and international journalists and allow for a peaceful and democratic transition,” Obama and the EU representatives said in the joint statement.

Over the past two years, Europe’s debt crisis has affected Greece, Portugal and Ireland and now threatens the economies of Spain, Italy and France.

The most recent United States-European Union Summit was held in Lisbon, Portugal on November 20, 2010.