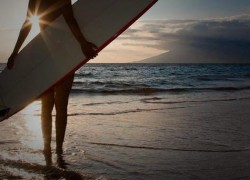 The Porto Surf Film Festival is calling for submissions for its Short Rides 2014 competition. The organization will accept features with a total running time under 30 minutes, coming from any country in the world.

On its 2nd edition, the 2014 Porto Surf Film Festival will include in its program a short film competition with surfing, windsurfing, kitesurfing, bodyboarding and all board sports in the storyline.

Each director may submit up to three films. The submission period runs through April 15, 2014.

“We are looking for films that embed ocean values, the spirit of surfing, and the passion for waves. We want that those who have never experienced may feel the desire to wear a wetsuit for the first time,” said organizer Carlos Rui Ribeiro.

The winner of the Short Rides will be announced by the jury of the short film competition, during the upcoming Porto Surf Film Festival, to be held in the spring/summer of 2014. The date and venue were not announced.

Porto holds Portugal’s biggest surf center. The second largest Portuguese city, Porto is one of the most important urban and cultural centers in the country. The city has great surf spots, history, cultural venues, night life and outdoor activities. A top European upscale tourism destination, Porto was recognized in 1996 as a World Heritage Site by UNESCO. The city is also famous for being the home to Port wine.