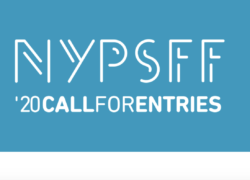 The Arte Institute has announced the 10th Edition of the NY Portuguese Short Film Festival (NYPSFF), scheduled for screenings in New York, in May 2020, at the Lincoln Center and Tribeca Film Center. Submissions are welcome until March 1, 2020.

The first Portuguese film festival in the United States, since 2011 the NYPSFF has had tremendous success, with sold-outs audiences.

Ana Ventura Miranda, Director of the Arte Institute, the organization responsible for the Festival, has stated, “The NY Portuguese Short Film Festival has been a great showcase for contemporary Portuguese cinema and has opened doors to new national filmmakers in terms of promoting and publicizing their shorts and by participating in international film festivals.”

Submissions are selected and submitted to an international  judging panel, composed by industry professionals from the Portugal, Brazil and the United States.T

The film festival is opened to new generations of Portuguese filmmakers, offering the unique opportunity for contemporary Portuguese cinema to reach many more countries and more cities worldwide.

Founded on April 11, 2011 the Arte Institute is a non-profit organization that promotes culture and showcases art from Portugal. It is a space that offers a creative environment for Portuguese artists in the field of art, literature, music, dance and film.

According to its mission, the Arte Institute provides a space for inter-cultural inspiration and is a catalyst for an innovative artistic dialogue between the many communities in New York and the Portuguese artists. This environment fosters a unique exchange between traditional and non-traditional views of how art can bridge audiences with different cultural background.