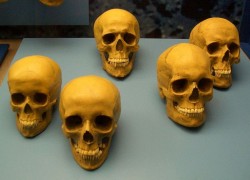 Researchers at the North Carolina State University found that craniofacial differences between contemporary men and women are less pronounced than they were in the 16th century.

The study which examined hundreds of Spanish and Portuguese skulls spanning four centuries, also found that, while craniofacial features for both sexes in Spain have changed over time, the changes have been particularly significant in females.

According to the findings craniofacial sexual differences were very similar between Spanish and Portuguese populations, implying that standards developed for identifying sex in Spanish skulls could also be applied regionally.

Results were based on the comparison of more than 200 skulls dating to 20th- and 16th-century Spain, as well as about 50 skulls from 20th-century Portugal using a state-of-the art 3-D shape analysis system.

Details about how the skulls were obtained were not readily available.  The study was published in The Journal of Craniofacial Surgery.