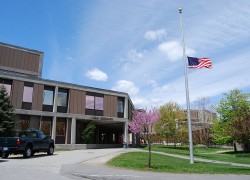 The Fall River and Holyoke school systems may face a takeover by the state over the next year if they don’t significantly improve, said the Massachusetts Commissioner of Education Mitchell D. Chester.

According to him the  the two districts are among nine the state considers underperforming – either because of weak administrative practices or poor academic performance.

Fall River educates 9,873 students, most of whom are white and come from low-income families. About 20 percent of the population is special education students, and about 30 percent is still learning English or English is not their first language.

The state began monitoring Fall River in 2009, when the former superintendent resigned and the mayor asked for a review of the school system.

Fall River hosts one of the largest Portuguese-speaking communities in the US, the highest concentration of Portuguese Americans in the country. In 2000, 43.9 percent of Fall River residents identified as being of Portuguese heritage, most of Azorean origin, many from São Miguel island.

There are smaller, but significant presences of other Portuguese-speaking communities in Fall River – Portuguese from mainland Portugal, Madeirans, Cape Verdeans, Brazilians, and Angolans, among others. The Portuguese came to Fall River in the late 1800s to work in the city’s cotton mills.