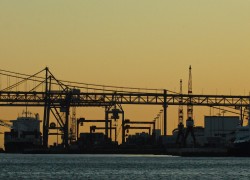 Portuguese port workers are staging a week-long strike to end next Saturday. The strike has hit the largest country’s ports, including the port of Lisbon, the second largest container port in Europe’s Atlantic coast.

According to Belmar da Costa, head of the Naval Shipping Agents’ Association, the walkouts will prevent 80 to 100 ships from docking at Portugal’s main ports. About 64% of Portugal’s foreign trade is conducted by sea.

On December 22, Confederation of Maritime and Port Unions (FESMARPOR) had announced workers would walkout in protest against layoffs claiming that “stevedoring companies and operator associations were using the current crisis to annul and eliminate previous agreements and deals.”

The Portuguese Federation of Transportation and Communication Unions (FECTRANS), has also announced a number of strikes and slowdowns nationwide scheduled for February 2.

Portuguese Train Engineers’ Union had called a four-day strike over the holiday weekend cancelling most national rail services over December 23-25 and January 1. The strike also called for an overtime boycott by engineers from December 23 through the end of January.

The transportations unions decided to strike to oppose the package of measures announced by the Government which will “aggravate the costs for users and reduce workers’ wages.”

Portuguese workers are protesting against the government austerity budget measures for 2012 and 2013 being implemented by center-right Prime Minister Passos Coelho.

Unionists argue that the budget cuts will eliminate thousands of public and private jobs and will result in across-the-board tax hikes that will impoverish the country further, sending Portugal into a deeper recession.