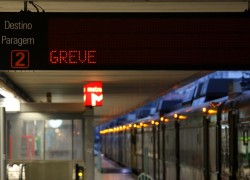 The Portuguese Federation of Transportation and Communication Unions (FECTRANS) has announced a number of strikes and slowdowns nationwide scheduled for Thursday, February 2.

Workers are protesting against the government austerity measures for 2012 and 2013 being implemented by center-right Prime Minister Passos Coelho.

The measures include higher prices for passengers and lower salaries for the workers in an attempt to cut the huge losses by public transport operators.

Economy Minister Álvaro Santos Pereira acknowledged Wednesday that unions were “within their right” to strike, but said, “The restructuring will go forward because there is no alternative”, Santos Pereira told reporters, adding that the sector’s debts equaled 10% of
Portuguese GDP.

Although being severely affected, many passengers appear to agree with the workers’position. The president of the commuters’ movement, Carlos Braga, told Lusa that strikers “have more than enough reason to show their discontent”. He said that “500 workers are expected to lose their jobs in the Lisbon bus company alone.”

The Portuguese Train Engineers’ Union also called for a four-day strike cancelling most national rail services over December 23-25 and January 1. The strike also called for an overtime boycott by engineers from December 23 through the end of January.