Straight from Pico: An interview with the author of ‘The Tenth Island’ 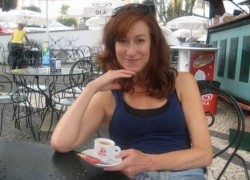 Diana Marcum, has worked at the Los Angeles Times as a senior journalist since 2011, covering the Central Valley in California and places beyond.

Her career began with a gig as an editorial assistant and, later, she became a reporter for the San Bernardino Sun and the Fresno Bee.  In 2015, she won the Pulitzer Prize for feature writing: her colorful portraits of farmers, fieldworkers and other Californians in drought-stricken towns in the Central Valley are powerful histories of Portuguese culture.

In The Tenth Island her semi-autobiographical debut novel inspired by the Azores: “Reporter Diana Marcum is in crisis. A long-buried personal sadness is enfolding her—and her career is stalled—when she stumbles upon an unusual group of immigrants living in rural California. She follows them on their annual return to the remote Azorean Islands in the Atlantic Ocean, where bulls run down village streets, volcanoes are active, and the people celebrate festas to ease their saudade, a longing so deep that the Portuguese word for it can’t be fully translated” (Amazon).

Most recently, Marcum has been a 2018 Nieman fellow at Harvard.  This fellowship is awarded to candidates working in all media in every country around the world.  At Harvard, she is “studying the impact of true stories on people and cultures as well as the divide between urban and rural sectors and whether shared stories can bridge that gap.”

Q: Congratulations! Your new book The Tenth Island, a memoir about the Azores, has a lot of people in the Luso community talking, creating buzz, as THE summer book to read, boasting a phenomenal 653 reviews on Amazon. Can you tell me how you came to write it?

A: THE summer read? Wow, thank you Luso community!

It started way back before I even knew the word Luso, with a party in Tulare County, California. (This is also how the book begins, but since it happens early in the story, I’m hopefully not giving spoilers.) I stumbled upon the Azorean diaspora in Central California and ended up at a party, out in the country, with bulls and beer and widows in black and dairy farmers and people crying while they danced to the old songs of their islands. And I learned the word saudade. I think somewhere deep down, even then, I knew I’d write a book about it someday.

Q: Readers are comparing The Tenth Island to Eat, Pray, Love and Under a Tuscan Sun.  How do you think they are similar?

A: Well, there’s the obvious: solo women traveling and searching. And who doesn’t want to be compared to such huge bestsellers?

But I think The Tenth Island is more a cousin than a sister of those books. To me, they are more focused on the interior journey. They are very intimate and personal. I do write in first person and do share some of my personal griefs and joys, but I’m more interested in other people’s stories. And even though I love both those books and am really flattered, it kind of prickles my feminist side that it would seem every book written by a woman traveler must be compared to Eat Pray Love or a woman rebuilding a villa in Italy.

Q: What research did you do in preparation?

A: I read.  I didn’t know for sure, what it was I needed to learn. But I had a stack of curiosity. So I read Portuguese history. I read about volcanoes, migration patterns, cows. I read oral histories and Vitorino Nemésio. Then when I was writing, I had all these pieces that I could start fitting together with my own story.

Q: Is The Tenth Island, California?  Since so many Azoreans migrated to California in multiple waves of immigration?

A: I think everyone gets to decide for themselves their definition of The Tenth Island. For me, at first, it was the Azorean diaspora in California (They sometimes call themselves that.)  Then, I added Boston and Toronto. But, by the end of my journey, I had a more universal definition.  I now think that most people at some point in their lives are part of a Tenth Island – between places and times and clinging to things they do not want to lose.

Q: How did you first become interested in Azoreans in California?  You had said a photographer at the Fresno Bee showed you a photo of a dairy farmer?

A: A photographer showed me a photo of a man plowing a field with oxen while talking on a cellphone in California, which led to me writing a newspaper story, which led to that party…and now here we are.

Q: You won a Pulitzer Prize in 2015 for your portraits of farmers, field workers and others in the drought-stricken towns of California’s Central Valley.  Were your subjects all of Portuguese descent?

A: No. There are many diasporas, many journeys and cultures that ended up in the Central Valley.  As I explain in the book, there is nothing as global as a California farm town.

Q: When you were writing the original articles, did you attend any festas? or ceremonies?

A: Yes. I’ve been to bullfights, auctions, milk parades, holy spirit festivals, fado concerts and sat around backyard tables eating São Jorge cheese and drinking wine – if that counts as a ceremony- I think it should!

Q: The beginning of the book has background information on the Azorean settlers in California, what research did you do before your journey to The Azores?

A: On top of reading, I listened. Whenever someone said “My grandmother first arrived…” or “When our family first came…” I was all ears.

Q: The sub-title of your book is “finding joy, beauty and unexpected love.” Did you find love in The Azores?

A: I did! But many different kinds of love. I actually protested the subtitle a bit at first because I was afraid it sounded too gooey, too much like one of those novels with a swooning heroine. But my agent said “No. There is a romance, but it’s also about this unexpected love you found for the islands.” 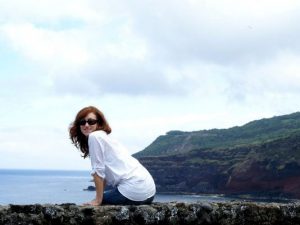 Q: What was particularly healing to you about the islands?

A: The human scale. I like that in the villages, there’s a bread guy and a fish guy and the woman who runs the bakery and the one beauty shop where everyone is discussing last night’s festa. Everyone says “Bom Dia” or Boa Noite” when they pass. There’s human connection.

There’s also intense natural beauty and everywhere, in all directions, the sea. There is something about looking at the ocean that draws my gaze outward and makes me put my shoulders back and take a deep breath and feel hope.

Q: What island or islands did you visit?  Did you have a favorite?

A: I’ve been to Terceira, São Jorge, São Miguel, Faial, and I’m answering these questions while on Pico. I won’t say a favorite because 1). I know better than that! 2). I still have islands to visit.

Q: You use the word saudade.  What does it mean to you?

A: It’s an indescribable longing. It’s a yearning for something that’s just out of reach – lost in the past or something you just can’t even name. It has something to do with life and death and the feeling you get gazing at the sea.

Q:  Is there a special connection for you to Portuguese culture?  Are you of Luso heritage?

A:  I don’t know.  On the one hand, not that I know of and I certainly don’t look Portuguese. But I find it mysterious that I felt such a pull from the first time I set foot in the Azores. I’ve been to many beautiful places. But this was different.  There was instant recognition like when you meet someone and feel like you’ve known them forever.  I have suspicions that I am descended from Jews that fled to Azores during the Spanish Inquisition – but it’s nothing I know for sure, just this weird unsubstantiated hunch.

Q: How did you get started in journalism?  Was it a life-long dream?

Q: You’re self-taught as a writer, with no college, more of a throw-back to the working class writers of yore.  Like so many wonderful writers.  Do you think having more life experience versus an MFA gives you an edge? or a unique voice?

A: This is an interesting question to me and one I have been puzzling over. I recently finished a fellowship at Harvard, and it made me realize how different I am as a writer and as a person than if I had been in that environment when I was young and malleable.

It turned out it was important for me to go “back to school” because I’d always carried a sense of loss of not getting to go to college and an insecurity about whether I was  really qualified to write. But, I came to see that there are advantages to having come up my own way. Because I will never be writing about “them”: I am a “them.” I will always be writing about “us.”

Life experience teaches a person to not take themselves too seriously, or to ever think they know more than other people. And maybe there is an edge and a key to an authentic voice in that.

Q: Is there a passage from the book that you feel encapsulates the spirit of the memoir that we can share with PAJ readers?

A: It’s back to saudade:

The Azoreans who emigrated were homesick. Actually, it reached beyond that. There is a Portuguese word, saudade, that they say has no translation. It’s bigger than homesickness or missing someone. It’s a yearning that can be expressed in no other language. It is, as one Azorean friend puts it, “a strictly Portuguese word.”

They say it has something to do with death but mostly life and maybe the ocean and probably time, and the only way to understand saudade is to listen to fado, the Portuguese art of the sad song. Or, more accurately, songs of longing.

Q: Do you have any upcoming readings? or events?

A: I’ll be doing an East Coast blitz the second week of October. I hope anyone in the Boston area or Rhode Island who is interested in the book will come visit.

Q: What are you working on now?

A: I’m working on how to figure out a way to buy a house in the Azores! There are offers about optioning The Tenth Island for a movie. (If that happens, maybe it will help a little with my first quandary? So fingers crossed. ) And I’m starting a book about a butterfly farm in Belize.

Q: Was there a question I did not ask that you would like to address?

A: Since PAJ is specifically for a Portuguese audience, I want to say that I do understand that I am what my Armenian friends would call “odar” – other. I don’t have an insider’s view. The Tenth Island is written with affection and familiarity, but through non-Portuguese, Californian eyes and I’m very grateful that the Azorean community has been warm and accepting.

Millicent Borges Accardi is the author of three poetry books, most recent, Only More So. She is the recipient of fellowships from the National Endowment for the Arts (NEA), Fulbright, CantoMundo, California Arts Council, Fundação Luso-Americana (FLAD), and Barbara Deming. She organizes Kale Soup for the Soul: Portuguese-American writers reading work about family, food and culture. Follow her @TopangaHippie (on Twitter).

Title: The Tenth Island: Finding Joy, Beauty, and Unexpected Love in the Azores