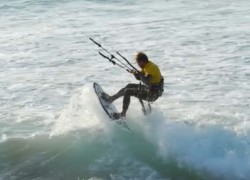 The world’s best kite surfers will gather on Guincho Beach, Cascais, Portugal, for the first event of the Kite Surf Pro (KSP) Tour 2012 to be held June 1  through June 10.

Sanctioned by the International Skateboarding Association (IKA) KSP is a four stage kitesurf pro world tour for wave riders with a kite. Established in 2010, the mission of KSP is to bring the world’s best kitesurfers to the best waves across the globe.

Cascais is considered by many to be one of the top surfing spots in the world. At Cascais’ Guincho Beach riders can find a strong breeze and supreme swells making it a prime surfing destination, ideal for stop one of the KSP’s first completion of the year.

Tour stop two of the competions will be held on Le Morne Beach, Maurities on September 7 to 16; stop three will take place on the West Coast, Ireland on October 19-28; and stop four is scheduled  November 29 to December 8 will take place on North Shore, Maui, Hawaii, USA.