STOP! Children being exposed to bullfight violence – By Len Port 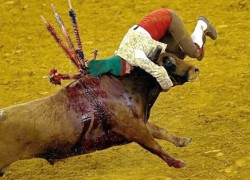 Many foreign holidaymakers are unwittingly mistreating their children and breaking the law by bringing under-age youngsters to bullfights, according to animal rights activists in the Algarve.

The activist group Cidade de Albufeira Anti Touradas (CAAT) is urging the government inspectorate in charge of safety at public shows to stop turning a blind eye to the illegal admittance of children under the age of 12.

The protesters claim that many youngsters are being blatantly exposed to animal cruelty every time a bullfight is staged in the Algarve.

Tourists make up the big majority of spectators in the Albufeira bullring, the busiest venue of its kind in the country.

Portugal’s commission for the protection of children and young people at risk (CNPCJR) confirms that the law clearly forbids entrance to under 12-year-olds.

There are no exceptions to this stipulation. When the authorities are unsure of a child’s age, parents are supposed to be asked to show proof in the form of an identity document. If parents are unable to do so, the responsibility for adhering to the law lies with them.

The United Nations Committee on the Rights of the Child earlier this year expressed concern and called on Portugal to investigate the mental and emotional effects of exposing child spectators to bullfighting.

Anti-bullfight protesters stop short of blaming holidaymakers for knowingly mistreating their children or breaking the law. Most British and other foreign parents, they say, are unaware of the law and are themselves victims of misinformation about bullfighting being an acceptable feature of Portuguese culture.

“Everyone is told that the bulls are not killed in the ring as in Spain, so it sounds as if Portuguese bullfighting is innocent,” says Isabel Searle, leader of the protesters. “But the tourists are not told about the suffering before, during and after the fights.”

This form of public entertainment has been going on in Portugal as well as Spain for centuries, but growing numbers of people in both countries are demanding that it be finally banned.

Children along with adults visiting a tourada in Albufeira can expect to witness four to six bulls being taunted and speared in a spectacle that lasts for about two hours.

Bullfights are held weekly during the summer months. “Tourist go out of curiosity. They are not aware of the cruelty involved,” said Mark Evans, a member of the activist group. “I’ve seen many holidaymakers looking shocked and sometimes physically sick after their first bullfight. They don’t go again.”

CAAT activists protest near the Albufeira bullring in June 2014

CAAT protesters of various nationalities are planning another peaceful demonstration outside the Albufeira arena next Wednesday evening (July 16th) and again on the evening of Friday 22nd August. They are appealing for others, foreign residents as well as Portuguese, to join them.

When questioned about young children being allowed into the bullring, police have told protesters it is a matter for the Inspeção-Geral das Atividades Culturais (IGAC). The inspectorate has so far shown no interest in rigorously applying the law, say the activists.

By promoting awareness among tourists about the brutality involved, protesters hope to bring about an end to bullfighting in the Algarve, which might eventually lead to a ban throughout the country.

One of the few British aficionados living in the Algarve, who has been going to bullfights in Spain for decades, told us that the standard of bullfighting in the Algarve is low because they are merely tourist shows.

He agreed that bullfighting is a violent spectacle and noted that even at its highest level it is a dangerous one for the men fighting on foot, who are often injured, sometimes fatally when hit by a charging bull weighing perhaps 500 kilos. Horses, which feature strongly in Portuguese-style bullfighting, are also at risk.

Compared with domesticated cattle raised for meat, bulls destined for the ring have a much better lifestyle, he claimed. Quality fighting bulls are kept in good pastures for five years before entering the ring in top physical condition, whereas cattle are often dosed with drugs to hasten growth and kept in miserable surroundings before being slaughtered at less than two years old.

He disputed that support for bullfighting was decreasing, saying that the banning of bullfighting in Catalonia was politically motivated, while its popularity in Andalusia and parts of Portugal was still very strong. In France it is on the increase, he said.

Families with young children among the spectators in Albufeira.

Vasco Reis, a retired Portuguese veterinary surgeon who has studied bullfighting and whose persistence helped abolish it from the Algarve municipality of Aljezur, argues that anatomic, physiologic and neurological reactions of bulls, horses and humans are similar when they are threatened, frightened or hurt.

“Common sense tells us this and science confirms it,” he says.

“It is important to mention the claustrophobia and the panic that the bull experiences when it is taken violently from its field and transported in a confined space. It is then constantly abused with the intention of weakening it physically and emotionally before it is led out into the ring.

“Once in the ring, the bull is subjected to much provocation and torture. Afterwards comes more suffering with the always violent and painful extraction of the spears, tearing and striking the skin to free the banderillas.

“When it is all over, the animal is transported away, worn out, hurt and febrile, in a severe toxic metabolic acidosis, which makes it very sick, until death in a slaughterhouse a few days later finally frees it from its suffering.”

The vet maintains that horses in a bullring suffer from exhaustion and terrible psychological tension because they are dominated and encouraged by force to confront the bull when the horse’s natural instinct is to run away from it.

“With the heavy training, the spurs which hurt and wound it, the bits in the mouth and the chain around the jaw, which is a painful way to overpower it, the horse risks death in the ring either by heart attack or because of the wounds inflicted on it.”

Vasco Reis concludes: “It is difficult, if not impossible to believe that bullfighters and those who enjoy bullfighting can say they love bulls and horses, when they subject them to such violence.

“I can’t help but wonder why such a violent activity, based on the public suffering of these animals, is allowed to continue authorized by law, or even how it has fans and is applauded and glorified by some. A true democracy does not permit torture.”
____________