Sports: The 2017 Azores Trail Run is open to participants – Azores 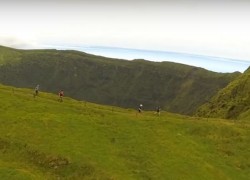 In its fourth edition, the international sports competition consists of several trail running races taking place each year in the end of May. Runners from across the globe are encouraged to participate. The program is designed for participants to get to know the islands while running.

According to the organization rules, the minimum age for participation on any of the races is 18 years, completed until the day of the event, with exception for the Family Trail, on which participants under 18 must be accompanied by an adult.