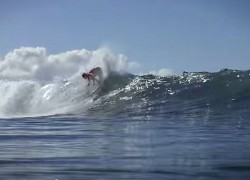 SATA Airline is hosting the sixth edition of the “SATA Airline Azores Pro” surf competition, the fourth stop on the European Qualifying Series with the participation of 100 world athletes including 14 top surfers from the Samsung Galaxy ASP World Championship Tour.

Starting Tuesday, September 2 through September 7, the event is being held at the Santa Barbara Beach, in Ribeira Grande, São Miguel Island, where the best of the best in the world will be competing.

“It’s a huge pleasure to have a PRIME event in the Azores, and in particular on the island of São Miguel, which proves the correctness, consistency and quality of the waves are a certainty in Santa Barbara, Ribeira Grande,” said Rodrigo Herédia, event organizer.

Santa Barbara beach, with water temperatures averaging 20-24°C in the summer, is known as the “Hawaii of Europe” to many international surfers.

One of the most important stops in the world surf completion circuit, the SATA Airlines Azores Pro is organized by DAAZ Eventos co-sponsored by SATA Airlines,  Turismo dos Açores, Câmara Municipal da Ribeira Grande, Sumol and Moche amongst other.

The Azores  (population 250,000) is a region of Portugal composed of nine islands situated in the North Atlantic Ocean. The archipelago discovered by Portuguese explorers in the 15th century, became an Autonomous Region of Portugal in 1976. Since the 17th century, many Azoreans have migrated mainly to Portugal mainland, Brazil, the United States and Canada.