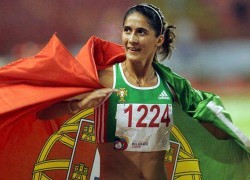 Dominating much of the race, Moreira finished in 8:58.50, two seconds ahead of Harrer, while Britton took bronze. Runner-up four years ago in the Turim 2009, she was the 3000m silver medalist.

There are 12 athletes representing Portugal in 2013 Athletics European Indoor Championships, in Gothenburg.

The highest expectations were directed to Sara Moreira, the Portuguese athlete who ranks eighth in the European 3000 meters and was the second runner up two years ago at the contest.

Sara Moreira is a female long-distance runner who specializes in the 3000 meters steeplechase and 5000 meters  She reached finals at the World Championships in Athletics in 2007 and 2009. She represented Portugal at the 2008 Beijing Olympics and the 2012 London Olympics. She was a 5000m medalist at the European Athletics Championships in both 2010 and 2012.