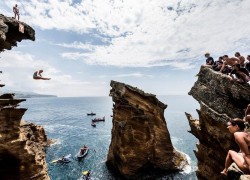 For the fourth successive year, 16 professional cliff divers from around the world are gathering in the Azores to participate in the third stop of the 2016 International Red Bull Cliff Diving World Series.

Competitions are held in a limited number of venues around the globe. The four previous competitions on the Vila Franca do Campo islet were held in 2012, 2013, 2014 and 2015.

Divers will leap from a platform situated 28 meters above the Atlantic Ocean to take a free fall from a monolith off the crater walls of the islet achieving speeds of approximately 85kph. Without the support of a rock solid platform the challenge creates a special thrill for the athletes and the spectators.

Established in 2009, the Red Bull Cliff Diving World Series is a sport extreme international annual completion created in 2009 by Red Bull. The cliff diving events are limited to number competitors in a limited number of venues around the globe. Five international judges score each dive based on a scale of 0 to 10 in half-point increments.