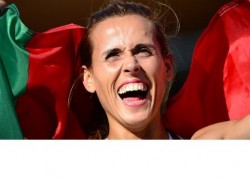 One of Portugal’s top runners, Félix had won a gold medal at the 2012 European Athletics Championships, held in Helsinki, Finland.  She came  first in the 10,000m, finishing the race in 31:44.75, a personal record, followed by British Jo Pavey and Ukrainian Olga Skypark.

Félix was also the runner-up at the 2011 European Cross Country Championships, winning a silver medal, and represented Portugal in the 2012 London Olympic Games.

Launched in 1897, the Boston Marathon is the oldest in the world and one of the five “World Marathon Majors” (Boston, London, Berlin, Chicago, New York). According to organizers, the official participation number for all divisions, including wheel racers, was 24,662 people from across the globe.

The course of the race (26.2 miles) extends from Hopkinton to Boston, ending at the famous finish line on Boylston Street in front of the Boston Public Library.

Ana Dulce Félix, who competes in track, cross country and road running events, was the top European performer in the 10,000 m at the 2011 World Championships in Athletics, where she came eighth. She came close to the podium at the 2011 New York City Marathon, taking fourth with a personal best of 2:25:40 hours.  She also led the Portuguese team at the 2011 European Cross Country Championships and won silver medals both individually and in the national team.