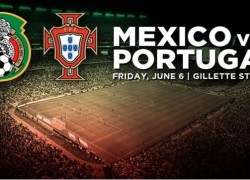 Next week, the Portuguese national team will be in United States east coast to play two pre-World Cup matches before heading to Brazil for the 2014 FIFA World Cup, featuring Cristiano Ronaldo, the most recent FIFA Ballon d’Or winner, considered the best world footballer.

Over 50,000 tickets have been already sold for the Gillette Stadium match, expected to feature Cristiano Ronaldo for Portugal as well as Mexican stars Javier Hernandez (Chicharito) and Giovani dos Santos. Both Portugal and Mexico are in the World Cup which begins June 12 in São Paulo, Brazil.

The Mexican soccer team is one of the most popular clubs in South America and a top world contender. The teams have not played against each other since the 2006 World Cup in Germany.

As a highlight, the match at the MetLife Stadium is taking place on Portugal Day, a Portuguese national holiday celebrated annually on June 10. The date honors the life of Luiz Vaz de Camões, Portugal’s national poet who died June 10, 1580. For the Portuguese people living abroad, the Portugal Day is also the time to showcase their heritage and ethnic pride.

At the Newark MetLife Stadium, the Irish team will feature LA Galaxy striker Robbie Keane as well as the Everton trio of Aiden McGeady, Seamus Coleman and James McCarthy. Ireland comes to the United States after missing out on the upcoming World Cup by finishing fourth in Group C in European qualifying.

Starting June 3, the Portuguese national team will train at the Atlantic Health Jets Training Center in Florham, New Jersey, in preparation for its games against Mexico and Ireland.