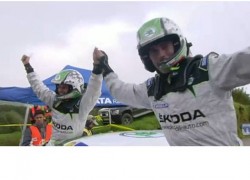 Alongside navigator Pavel Dresle, Kopecký drove a Michelin-shod Škoda Motorsport Fabia Super 2000 to victory.  The winner, he has increased his lead of the ERC standings to 27 points heading to round five in Corsica next month.

Broadcast by Eurosport TV to over 100 million viewers, the 48th SATA Rallye Azores was held April 25, 26 and 27, on São Miguel island with the participation of 40 drivers from 16 countries.

Held for over 40 years, the SATA Rallye Azores is a 19-stage gravel rally taking place on the island of São Miguel. It starts starts in Ponta Delgada, at the Portas da Cidade [Gates of the City].

The challenge has been one of the most important legs in the ground stage of the National Championship. Its rankings also contribute to the European Rally Cup organized by FIA (the Fédération Internationale de l´Automobile).