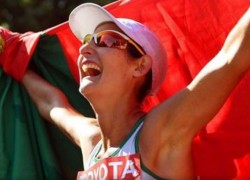 Portuguese athlete Inês Henriques beats her own world record by more than 2 minutes to win the inaugural women’s 50-kilometer race walk title, on Sunday, at the IAAF World Championships, at The Mall, in London (UK).

Henriques, 37, crossed the finishing line in 4 hours, 5 minutes and 56 seconds, setting a world record and global tilted and getting $160,000 for her win.

She beat comfortably her previous best of 4:08:26, which she set in January after the IAAF ratified conditions for a women’s 50-kilometer record.

“It felt like at home in London with so many Portuguese fans supporting me. I hope that in future we will see more women competing at this distance,” she told reporters.

In a short statement published on the website of the Presidency of the Republic, President Marcelo Rebelo de Sousa congratulated Henriques for the gold medal and the new world record.

“Another notable performance by a Portuguese athlete who elevates the name of Portugal and upholds national athletics and sports,” the President stated.

Prime Minister António Costa congratulated Inês Henriques as “a motive of pride for Portugal.” Minister of Education, Tiago Brandão Rodrigues, and Secretary of State for Youth and Sports, João Paulo Rebelo, commended the winner for her “memorable performance.”

The International Association of Athletics Federations (IAAF) introduced the women’s 50km to the program in July in order to ensure gender equality.