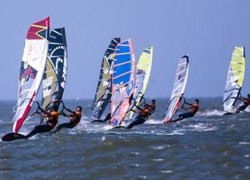 For the second consecutive year, the Azores are hosting the ‘Formula Windsurfing World Championships’ (FWWC’15), to be held from on April 7 through April 12, in Praia da Vitória bay, Terceira island.

The competition will gather 60 athletes, from 17 different countries, among them some of the top world competitors.

“This is the most important event in the world in windsurfing,” said Carlos Borges of the Naval Club of Praia da Vitória, the organizer of the event. “This is happening here because we offer excellent conditions for water sports activities and have a very sheltered bay,” he told the press.

An estimated 2 million people, between the ages of 15 and 45 years, practice the sport worldwide. The Government of the Azores, the main co-sponsor of the event, in partnership with the Associação Formula Windsurfing Portugal, hopes to continue promoting the competition as tourism reference.

Established in 2973, the Naval Club of Praia da Vitória has organized local, national and international water sports championships including the European Windsurfing Competition three years ago.