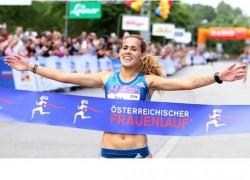 Ana Dulce Félixwon the race for the third time (the first time in 2011 and the second time in 2012) finishing the run with 15m41,6s while Sara Moreira finished with 15m49,6s. They were followed by three-time winner of the event, German Sabrina Mockenhaupt, in third place with 16m08, 6s.

Starting in 1988 with 440 participants, the Austria Women’s Run grew into Europe’s biggest women’s running competition with more than 3,000 runners and over 30,000 participants. The event is also the largest race of its kind in the German-speaking world and is the second-most-popular run in Austria behind the Vienna Marathon. The competition is open to all women with ages ranging from six to 80.

Ana Dulce Félix, one of the leading European long distance women runners, won the Silver Medal at the European Cross Championships 2011 in Slovenia. At the ING New York Marathon 2011 she set her personal best over the marathon-distance (2:25:40). Only a few months before, Félix finished 8th at the IAAF World Championships in Athletics in Daegu (10,000m).