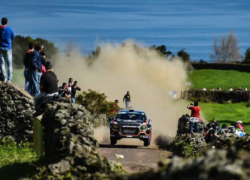 One of the most spectacular sport events on the international calendar, the 55TH AZORES RALLYE is taking place on São Miguel Island on September 16-18.

The contest begins at the Portas da Cidade (Gates of the City) in Ponta Delgada, passing through some of the most emblematic scenic spots of São Miguel island, over a competitive distance of 201.74 kilometers. Due to COVID’19 restrictions the City Show on Ponta Delgada’s sea front won’t run this year.

Postponed from 2020, the 55th Azores Rallye will essentially run an all-new format, taking a 13 crisscross of the island scenery and lush countryside characterized by its breathtaking nature.

FIA World Rally Championship is backed up by a global broadcast package, which includes extensive coverage on the various Eurosport platforms. Four stages on each event are shown live on Facebook and YouTube, while ERC Radio is on-air from all events.

There will be live coverage, including from the ERC’s camera in the sky, plus expert commentary and analysis from Julian Porter and Chris Rawes, on Facebook and YouTube of the following: Azores Rallye TV goes on air at 14h00 local time (CET -2) today (Wednesday) with daily live coverage until Saturday. Follow the link here.