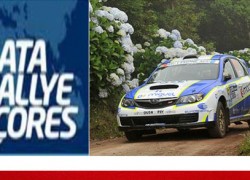 This year, the 48th SATA Rallye Azores is scheduled for April 25, 26 and 27, as the round four of FIA European Rally Championship (ERC) composed of thirteen rallies. A  4-hour live coverage will be broadcast by Eurosport TV expected to attract over 107 million viewers.

Held for over 40 years, the SATA Rally Azores is a 19-stage gravel rally taking place on the island of São Miguel, set to start in Ponta Delgada, at the Portas da Cidade [Gates of the City]. Acording to the organizers, 35 drivers from 16 countries will participate.

One of the most challenging rallies on the international rally calendar, the SATA challenge covers approximately 240 miles through the São Miguel island stunning scenery. It is the main tourism attraction and the biggest sporting event of the Azores.

This year, ERC is introducing a new feature, the “qualifying stage” which will determine the starting order for the first day of challenge. For the first time the challenge counts for the FIA (Fédération Internationale de l´Automobile) part of the European Rally Championship.

The challenge has been one of the most important legs in the ground stage of the National Championship. Its rankings also contribute to the European Rally Cup organized by FIA (the Fédération Internationale de l´Automobile).