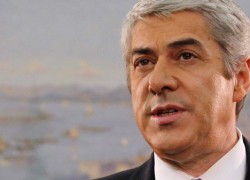 According to poll figures released on April 21st, outgoing socialist Prime Minister José Socrates was leading in polls with 36.1 percent, while the opposition party — the Social Democrats (PSD) — stayed at 35.3 percent.

An early March poll predicted that Passos Coelho, the leader of the Social Democrats in opposition, would win the June 5th elections with 46.7 percent votes over outgoing incumbent José Socrates with 24.5 percent.

Last Tuesday, Portugal reached an agreement on a three-year bailout package worth 78 billion euros ($116 billion USD) after nearly two months of negotiations with the European Union and the International Monetary Fund.

Socrates resigned last in March, after his minority government austerity measures were rejected in Parliament by the parties in opposition. José Socrates was under pressure from the opposition to request the EU bailout which he refused and then requested after having resigned.

Portuguese opposition parties — the Social Democrats (PSD) and the Communist Party (PC) — had rejected Socialist government’s austerity measures meant at avoiding the EU bailout, triggering the current political crisis that lead to the resignation of Prime Minister José Socrates, the dissolution of Parliament and the call for the June 5th early elections.

Socrates and his minority Socialist Party have governed since the last election in 2009. He is currently a caretaker prime minister, with limited powers, until a new government is formed.