Soccer: Pauleta to be honored by the Girondins de Bordeaux – France 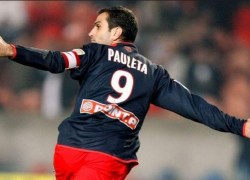 Former international professional footballer, Pedro Miguel Carreiro Resendes, commonly known as “Pauleta,” will be honored in Bordeaux, France, on November 30, where he will deliver the opening kick-off in a match between the Girondins de Bordeaux and Lille Olympique Sporting Club (LOSC).

Pauleta, 41, was born in the São Roque Parish, Ponta Delgada, São Miguel, Azores, where he started his career at youth level playing for local clubs in his native island. After a brief career playing for national teams, in mainland Portugal, he spent most of his professional career as an international footballer playing striker for major leagues in Spain (Salamanca and Desportivo La Coruña) and France (Girondins de Bordeaux and Paris Saint Germain).

In November 2005, he signed to become a FIFA ambassador for the SOS Children’s Villages, the first Portuguese to do so. He is also an ambassador for the Paris Saint Germain, having represented the French club internationally in Morocco and India, with scheduled visits to Doha (Qatar) and New York (USA).

After ending his professional career, Pauleta returned to his native island where he launched the “Fundação Pauleta” a non-profit community based organization dedicated to underprivileged young soccer players between the ages of 5 and 12.

Pauleta is famed for his legendary goal celebration gesture of spreading his arms like wings earning him the nickname “Açor” after the “goshawk” a bird native to the Azores Islands.